Who’s Idea Was The Nation of Israel? 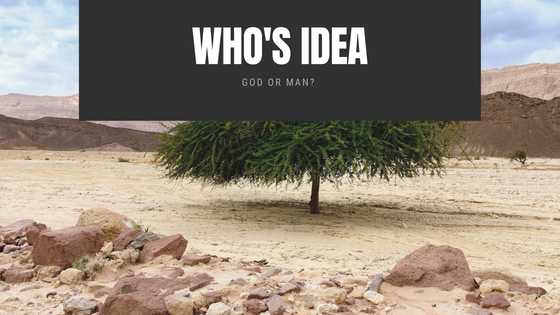 The beginning of the Israel Story is the call of Abram, later renamed Abraham. We find it in Genesis 12:1-3 – Now the Lord had said to Abram: “Get out of your country, from your family and your father’s house, to a land that I will show you. I will make you a great nation; I will bless you and make your name great; and you shall be a blessing. I will bless those who bless you, and curse him who curses you; and in you all the families of the earth shall be blessed.”

God called Abram to leave his country. Why? Because God was going to give him and his descendants a land, the land of Canaan. God called Abram to leave his family and his father’s house, literally his heritage, his lineage? Why? Because God was going to create from him a new people group, initially called Hebrews, later Israelites, and later Jews. We now have the three main protagonists of the Israel Story: God, the central character and by far the most important, and the two supporting characters: the land of Israel and the Jewish people.

Prior to this interaction between God and Abram, there is no indication in scripture that Abram sought God, knew God, or walked with God. In fact, we know that he grew up in an idolatrous country and in an idolatrous household. Abram was a Chaldean from a land that today would be located in southern Iraq. The Chaldeans of Abram’s time were polytheists, worshipping many false gods. In Joshua 24:2, we read that his father, Terah, served other gods.

Was Abram a Jew when God called him? No, there was no people group called Jews at the time.

Was he an Israelite? No, at the time of Abram’s call, there was no such country, and his grandson Israel, after which it would later be named, had not yet been born, nor had Israel’s father, Isaac.

Did Abram have a desire to live in Canaan and inherit it? We don’t know for sure, but it’s not likely. Why? Because we read in Hebrews 11:8 that Abram went out to the place (Canaan) that he would afterwards receive as an inheritance not knowing where he was going. It doesn’t appear that Canaan was on Abram’s radar.

Did Abram harbor a secret desire to be a great nation? That’s also unlikely. Why not? Because at this time, he and his wife, Sarai, were childless. Sarai was barren. Abram expressed this concern to God in the beginning of Genesis 15. God told Abram that He was Abram’s exceedingly great reward, but that wasn’t enough to placate Abram and satisfy his desire for a child. Genesis 15:1-2 – After these things the word of the Lord came to Abram in a vision, saying, “Do not be afraid, Abram. I am your shield, your exceedingly great reward.” But Abram said, “Lord God, what will you give me, seeing I go childless, and the heir of my house is Eliezer of Damascus?” Abram’s desire was for at least one biological child to be his heir. It’s not likely that nation-building was on his agenda.

One final question before we summarize the important takeaways from the call of Abram. There is a subject and a verb repeated four times in Genesis 12:1-3. Do you see what they are?  I will. This is God talking. So for those of us who want to know God’s will, I recommend that we pay attention when God says, “I will, I will, I will, and I will” because He is obviously expressing what? His will!

Jews being called the “Chosen People” has created animosity and resentment in some who aren’t part of the tribe. Their accusatory response may sound something like this, “Who do think you are? Do you think that your are better than everyone else?” But we didn’t choose to be chosen. In fact if you hang out with many Jews, you are likely to hear one of us say in light of the history of our people, “If this is what it means to be chosen, I wish God had chosen someone else.” What’s more, being chosen doesn’t mean being better. It just means chosen, and in this case, chosen for a purpose. That purpose is the blessing of all mankind.

Let me give you an example of what I’m talking about. My assumption is that many of you who are reading this are part of some community of faith. Your community of faith has a leader, a pastor, a rabbi, an elder, a something. Do you think that your pastor, rabbi, or elder is better than you, more spiritual, more loved by God? No, he or she simply is called for a purpose. Hopefully in the case of your leader, the call was long distance. This same principal applies to God’s choice of Israel and the Jewish and in our case the call was definitely long distance.

What about the Land? Today many people, particularly those influenced by international media, view the Jews living in Israel as a bunch of land grabbers, who went over to the Middle East and stole someone else’s land. But remember, living in and inheriting Canaan wasn’t our idea, nor was it something we deserved. Our people didn’t deserve to live in and own Canaan any more than the Kenites, the Kenezzites, the Kadmonites, the Hittites, the Rephaim, the Amorites, the Canaanites, the Girgashites and the Jebusites back in the day. Israelis today don’t deserve to live in and own the Land any more than the Palestinians. This is not a story about who deserves what. This is a story about God, His plans, His purposes, and His will. Let me ask you this. Yes, it’s a loaded question, but it is also relevant both in biblical times and today. Does God have the right to give a specific land to a specific people even if it is already inhabited? Really what I’m asking is, does God have a right to be God. I believe He does!

All the promises, blessings, and gifts that God gave to Abram and his descendants were God’s idea. All that God called the Jewish people to be was God’s idea. The central character in the Israel Story is God. It’s His story and the call of Abram is just the beginning.

John is the founder of The Israel Story. He is a teacher who communicates on the message God has given him about God's plan, purpose, and love for Israel and the Jewish people, and for all of mankind.